Well if one thing is for certain, it’s that Barrie Cassidy and Phillip Coorey have lit one almighty big fire underneath the leadership of the Australian Labor Party, over the course of the past 36 hours. By letting the cat out of the bag in greater detail that there’s serious misgivings present within key parts of Prime Minister Julia Gillard’s base, the commentary from both the Australian Financial Review and the ABC could be all that’s needed to spark yet another spill, given the dismal polls and other instances of disunity and resignation that have been going on within the ALP over the course of the past week. 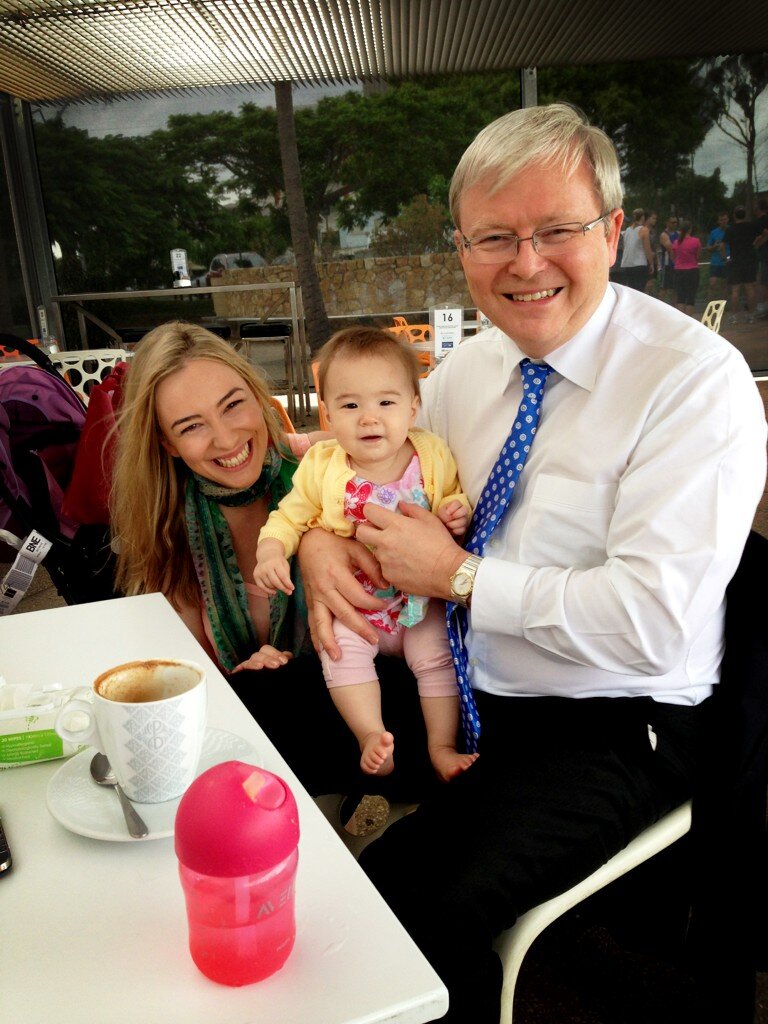 Now amidst the cries of “It’s all Kevin Rudd’s fault”, it’s worthwhile analysing the leadership capabilities and attitudes towards both office work and micro-management that both Rudd and Gillard possess.  While there’s no doubting that Rudd was an enfante’ terrible at times throughout his Prime Ministership, sometimes you’ve got to toss away the perspectives of party insiders, then re-analyse the core public data that we’re able to get our hands on about a particular individual in public life.  That means giving Rudd’s pecuniary interests the same treatment as I gave Gillard’s over the weekend.

Needless to say, Kevin Rudd is one very “thorough Grandpa Vegemite” for the most part when it comes to reporting gifts, accommodation and other financial interests…. All 70 pages of it….

Note – This Pecuniary Interest Statement was obtained from an official APH Public Register, which is accessible to the public via the APH website.

Now as you can see from my previous comment, Kevin Rudd has been providing some extremely detailed commentary of his family’s activities over the course of the past three years.  From purchases of investment and residential properties in Canberra, Brisbane and Noosa, through to memberships with Chatham House, media proceeds, company sales and creations, not to mention even Marrow Chew bones for The Rudd’s faithfully-loyal hound Abby, it’s evident that the Registrar of Members’ Interests, Mr David Elder, probably would’ve had a howling good time keeping abreast of Mr Rudd’s submissions over the years.

However, here’s where things get interesting….

Since The Rudds purchase of their Ocean Blue property near Noosa back in early 2011, Mr Rudd hasn’t disclosed the fact that his family has been renting out the property as a holiday house, within his Pecuniary Interests.  While the property itself has been listed as an investment, the income from the renting of the property hasn’t been, which is required under Section 10 of the Pecuniary Interests Register.  Needless to say, for $6800 a week (according to the Brisbane Times) during peak holiday periods and $550 a night (minimum 5 days stay) during off-peak periods, Mr Rudd could nearly finance a campaign based on the proceeds of this investment property alone.  Given that the exclusive nature of the neighbourhood in question would also allow Mr Rudd the opportunity to meet with various prominent individuals quietly, such a property could possibly have additional uses beyond that of an investment.

Furthermore, dependent of how exactly Ocean Blue is owned, the ATO might be interested in this particular property as well.  If the house is owned as a part of a self-managed superannuation fund for example, the fact that The Rudds have resided within the house on occasion could be in breach of various laws.

Strangely enough, this is a mistake that Mr Rudd appears to have possibly repeated by neglecting to note that his home at 35 Mueller Street, Yarralumla in Canberra has been used for rental purposes as well.  This property is also currently up for sale.

Now properties aside, it is pretty evident that Mr Rudd shares the methodical eye and passion for detail that his wife Therese and outright brilliant daughter Jessica both possess within the business and literary worlds.  Needless to say this is likely the character trait that caused Rudd’s initial downfall back in 2010, as the parliamentary Labor Party and its executive just weren’t ready for a perfectionist to be in the Prime Minister’s chair.  This isn’t a statement that I’m making in defence of Rudd either, as a quick peruse of the current cabinet and shadow-cabinet pecuniary interests shows that only The Hon Malcolm Turnbull is the only high-profile member of the House that comes anywhere near reporting in as much detail as what Rudd does in his entries.

Now this begs the question: was Kevin Rudd really as egotistic and pushy as he came across to a number of ALP members as back in 2010, or were Gillard’s supporters more fed up with having to be directly accountable for their actions and getting work done, more than anything else?  Given the presence of significant lapses, mistakes and delayed reports within the Pecuniary Interests of a lot of Gillard’s supporters at this time, that could be a real possibility which could also explain why Rudd’s personal polling is higher than his Government’s.  Namely, people like individuals who show a bit of passion, drive and efficiency, which are arguably traits that haven’t been associated with Gillard’s faction for quite some time.

Furthermore, unlike Gillard, Shorten, Swan, Roxon and Conroy amongst others, Rudd mostly remained distant from the union element of the Labor Party throughout his pre-parliamentary career, predominantly focusing on public service in the form of diplomacy, state bureaucracy, foreign relations and ministerial advisement up until his assumption of federal office back in 1998. Needless to say, the differences in workplace cultures that these individuals would’ve experienced, could’ve had a role in creating the previous levels of tension that we’ve seen between them.

Now even with the question marks hanging over the rent from the Yarralumla and Ocean Blue properties, Rudd would probably still have enough ammunition up his sleaves in order to give Prime Minister Gillard one hell of a headache if he decided to shake things up a little in a Labor caucus meeting.  That’s because while his Pecuniary Interests are still mostly structured, regular and detailed, her’s have been rather disorganised throughout her tenure as Prime Minister. Throw in the recent polling data and the complete and utter shambles that parts of the frontbench of the ALP is currently in, and he’d most probably have enough support to force a spill for the leadership or make Gillard angry enough that she steps down from Parliament on her own accord out of spite.  That’s because political survival can result in some extremely strange bedfellows at certain times.  But the big question is whether Rudd would actually accept such an opportunity if it were presented to him.

As some of you would recall, this is an area that I explored back in February about a month before the last ALP Leadership Spill. At the time I stated that Rudd was likely to remain loyal to Gillard, predominantly because he’s been enjoying family life over the past 18 months.  At the same time however I also stated that while Rudd’s position in Parliament is safe, Gillard’s most definitely is not, as an election defeat would undoubtedly spell the end of her career due to her history while in the Prime Minister’s office. Given that letting Gillard survive would undoubtedly clean out a lot of Rudd’s enemies within the Party from the caucus, that would undoubtedly have to be an attractive prospect that could give him greater freedom within the leadership, later on down the road.

In the presence of a minority government, I think that there’s got to be a greater focus than usual on psychology and personality by some members of the Press Gallery and other elements of the Canberra establishment though.  If Rudd returned to the Leadership there’s no guarantee that Gillard or some of her supporters wouldn’t resign instantly from Parliament, while there would also be the issue of The Greens and the Independents to deal with, given their previous statements about supporting the current Prime Minister.  If either one of those issues errupted, the coalition would instantly have the ability to force a “Motion of No Confidence”, which could force an election within a six week period or so.  Not only would such a move allow Gillard to take Rudd with her, but it’d also severely embaress the man as well.

Needless to say, Rudd’s polling data (and the fact that he’s mostly kept a detailed record of his pecuniary interests) is likely to make him either the “King” or the “King-maker” between now and the 14th of September. Consequentally, whether the “New Kevin” wants the job of Prime Minister as much as the “Old Kevin” will be the main question going forward.  That’s because while Kevin’s undergone a lot of changes in his life since February 2012, the position of Prime Minister mightn’t be all that desirable if he has to take it from Gillard in a destructive and hard fought spill.